News About One of Taupin’s Favourite Venues 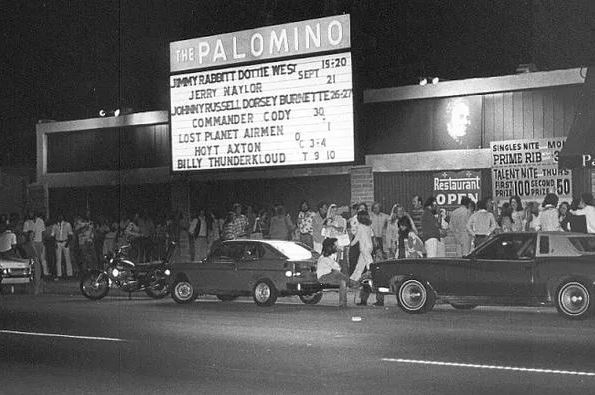 In 1980, Elton did a private warmup show at the Palomino Club in Los Angeles. The establishment is likely to be included in Bernie Taupin‘s autobiography, expected later this year. A while back on Instagram, he revealed that he’s been writing about ”this blast from my past,” and ”the best country music joint in LA.”

In fact, the Palomino has been making news lately. In September, Nashville’s Basement Club held a tribute and one of the performers was Jason Ringenberg. The songwriter, guitarist and vocalist told EJW: ”I played Palomino Club just one time, but it was monumental event for me. Jason and the Nashville Scorchers played there December 1983 on our first trip to California. There were several A/R people at the show, and we nailed it. The day after, we had five recording contract offers. So it definitely holds a very special place in my heart.
”And the Palomino Club tribute we did was a big success. All kinds of musicians and music people showed up. Music went on for several hours, and included an open mic song contest just like they used to do back in the day at Palomino Club. I had a blast.”
Proceeds from the evening went toward a new movie about the defunct club. The documentary includes input from the granddaughter of the late tailor, Nudie Cohn (who created outfits for performers ranging from Elton to Gram Parsons). Jamie Cuevas Nudie told this website that the club ”not only had great entertainment, they had great steaks! My grandfather would hang out there to support his customers.” A former member of Elton’s band was also interviewed, John Jorgenson.
See the poster here:
https://www.mulekickproductions.com/.