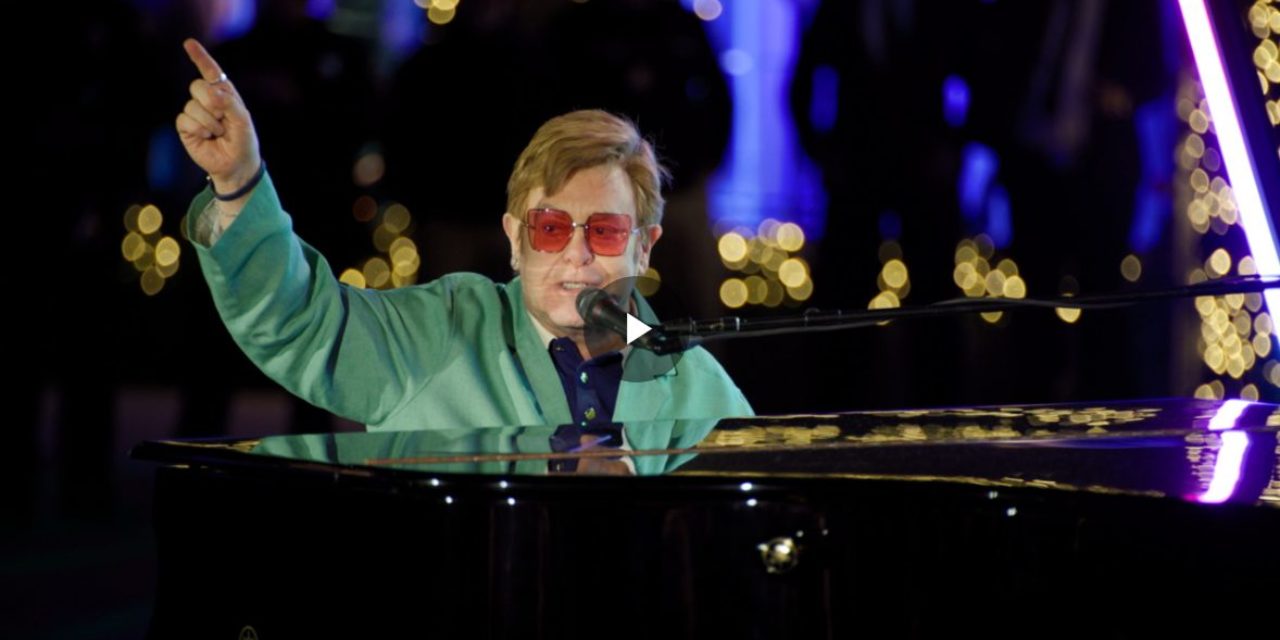 This week's top 5 on #AdultPopAirplay:

David Furnish told the outlet his husband gets their charts daily and that it ”feeds a part of his soul.”

JoJo Siwa has been talking about Elton, too. She valued his support when she came out. He considered her  to be ”a shining example” because she was showing others that ”love is love and people are people.” In addition, JoJo has fond memories of meeting Elton backstage when she was 15 years old.

Qatar has been criticised for stifling the rights of gay, bisexual, and transgender people. Last year, Elton and David Furnish supported activist Peter Tatchell in his fight to keep the FIFA World Cup away from the country. They were unsuccessful, but more notables have since spoken out, including Prince William, Dua Lipa, and Rod Stewart.

As you know, Elton and his family recently took part in Saks Fifth Avenue‘s lights show and window display.

There’s more to come. . . . On the 29th of November, at 12 p.m. ET, the saksfifthavenue-live-stream will feature David Furnish and Donatella Versace, talking about philanthropy and fashion. Elton will also discuss charitable work–particularly the EJAF–with Gucci’s creative director, Alessandro Michele, as well as friendship and collaboration. That takes place on 6 December, again at noon ET. The company has announced that Alessandro will be leaving, which elton was very sorry to hear about. No date of departure was provided, and Alessandro didn’t offer an explanation.

Devastated to hear that Alessandro Michele is leaving @gucci 😢

He is my dear friend and inspiration 🙏🏻🚀

Whatever he does next, I will be there for him because I love and adore him ❤️ pic.twitter.com/qiK9w2k7ig

• We can’t help but think of another designer who was close friends with Elton, Gianni Versace. Twenty-five years after his murder, Versace is the subject of an upcoming retrospective at the Groninger Museum in the Netherlands. According to a press release, one of the galleries will be devoted to nineties pop culture, where Elton’s music will be played. The exhibition runs from 3 December 2022 through 7 May 2023.

Elton was recently asked about the possibility of his sons becoming musicians. He told enews that it is much too early and they are too young to make up their minds yet. Whatever their aspirations, Elton and David Furnish will stand behind them.

Will Elton John’s Sons Follow in His Musical Footsteps? He Says… https://t.co/u0VTxhBF6Y

Elton also mentioned his collaboration with Saks Fifth Avenue. He is inspired, year after year, by their holiday windows. So he is thrilled to have his curated collection of merchandise benefitting his AIDS foundation, with some pieces integrated into Saks‘ latest window display.

The Elton John AIDS Foundation is also joining forces with DrHenSays, ahead of World AIDS Day on the first of December. Details will be divulged soon, and we are curious about how the animated physician is to be involved–and reminded of the expression, ‘Birds of a feather flock together.’

Thank you for your incredible work towards helping to end the AIDS epidemic! It’s an honor to support these efforts ahead of #WorldAidsDay.#EndAIDS #HIVAwareness https://t.co/OlD3dqGfbp

Looking back at his fashion choices with POPSUGAR, the Muppet Show feather suit remains one of Elton’s favourites . . . even though he got feathers in his mouth while singing. And Lil Nas X got to wear a similar outfit when they teamed up for their Uber-Eats campaign in 2021.

• A familiar song was performed at the Macy’s Thanksgiving Day Parade. It was Circle of Life, although the entertainer wasn’t Elton but the cast of The Lion King.

At this time of year, lots of fans are reminded of that Thanksgiving night in 1974 when John Lennon joined Elton and his band at New York’s Madison Square Garden. Last year, Elton was on The-Tonight-Show, where he spoke about how magical and poignant the performance was.

Elton also said that he was glad that Madison Square Garden wasn’t moved. He thinks the venue would have lost its magic. This is actually the fourth location of MSG (since 1968), and there has been talk for some time now, about finding another site.

As for this site (eltonjohn.world) . . . . There’s now a new podcast to listen to. The guest is bass player Kenny Passarelli, who was onstage at Elton’s 1975 Dodger Stadium shows.