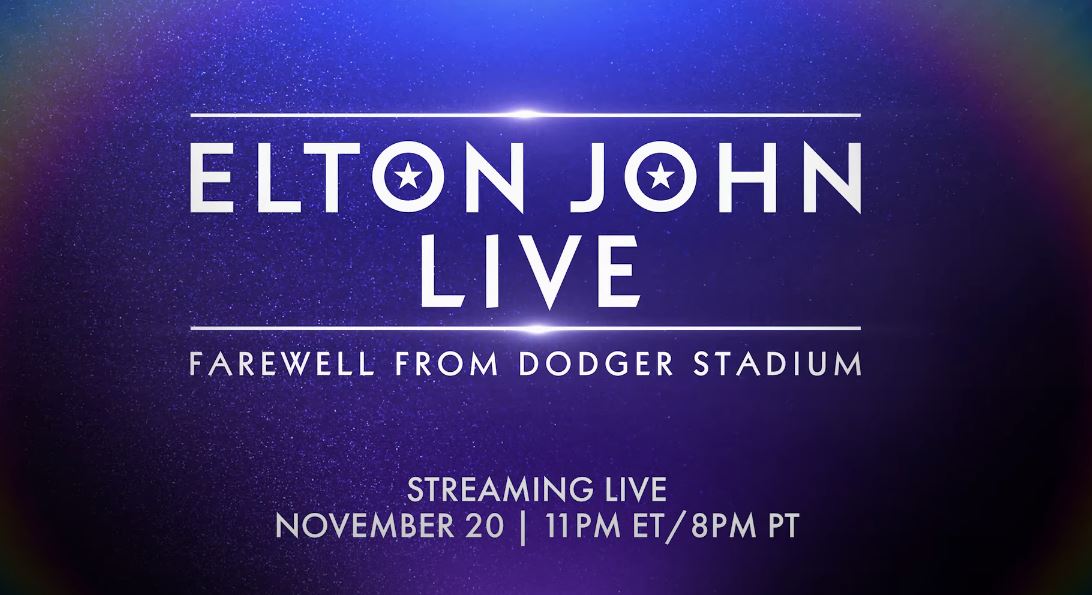 The Circle of Life.

When Elton returns to Dodger Stadium tonight (as well as on the 19th and 20th of November), it will be a full circle moment. He indicated as much when he sat down recently with Good Morning America’s Robin Roberts on ABC. Elton said while he has energy, it’s different for those in their twenties. He also displayed a couple of pictures of his kids and said both are musically inclined. In fact, Elijah is ”heading towards the stage.” But Elton is happy to step back, as he’s had ”enough applause. I just want the applause of my children, saying, ‘You’ve been a good dad.’ ”

In related developments, iHeartRadio is hosting a special,
Elton John: Thank You to America: The Final Song, to be broadcast across 320 stations on Sunday, 20 November. It’s set for 10 p.m. PT; 1 a.m. ET, and is to include a live simulcast of Elton’s final song and closing remarks during his last performance in North America at Dodger Stadium. Joining him at the concert in Los Angeles, California, will be Kiki Dee, Dua Lipa, and Brandi Carlile. And Disney+ has released the official_trailer for their live stream of Elton at Dodger Stadium that same night.

Another Disney+ project is If These Walls Could Sing, a documentary about Abbey Road, directed by Mary McCartney, and The official trailer is now out. It opens with Elton, who says that with so much history, ”it’s kind of a sacred place.”

Joel Corry, who came out with a remix of Elton and Britney Spears‘ Hold Me Closer, is teasing a collaboration with the former. He was on the-red-carpet-treatment-podcast, where he said that next year, ”Joel Corry and Elton John the banger might be coming.” He considers his friend to be ”the nicest, chill guy” who has ”his ear to the ground with new music.”

On 14 November, the Official Singles Chart marked its 70th birthday by unveiling a new survey, based on OfficialCharts Company data. It spans seven decades of the UK’s favourite music and finds Elton’s Candle In The Wind ’97/Something About The Way You Look Tonight still reigning supreme. With UK chart sales are in excess of 4.94 million, it’s no wonder.

• Who do you think is the best session drummer of 2022? The Elton John Band‘s NigelOlsson is among MusicRadar‘s nominees. So is Kenny Aronoff, who currently records and tours with Joe Satriani, but was once in Elton’s band. Voting runs through 22 November.