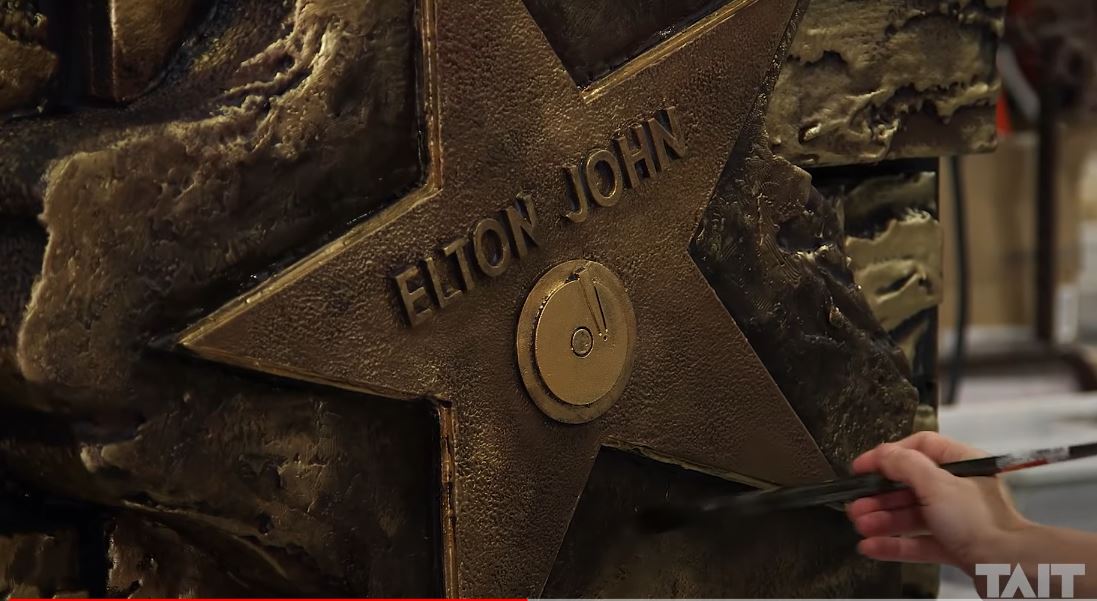 Elton will be appearing in an unexpected setting soon . . . the Saks Fifth Avenue flagship store in New York City. This follows Saks‘s announcement that they are donating a million dollars to the Elton John AIDS Foundation (to include proceeds from a curated collection of clothing, cologne, and more).

The event on the 22nd of November is to feature a holiday window unveiling and light show with Elton’s music. Viewers will be able to tune in to the company’s live stream at 7 p.m. ET.

Meanwhile, folks can find out how he celebrates the holidays and his thoughts about the collection. And don’t forget to check out sakslive at noon on 6 December. That’s when Elton sits down with the designer of his Farewell Yellow Brick Road tour outfits, Gucci Creative Director Alessandro Michele.

• Of course, the aforementioned wouldn’t be the first time that a department store has joined forces with the EJAF. In 1996, an Elton’s Closet sale was held in Atlanta, Georgia.

MT was at another such event in 2006, which offered clothes bought (and often worn) by Elton and David Furnish. That was held at New York City’s Rockefeller Center where options included everything from baseball caps to jeweled sandals. MT went with a sleeveless turquoise top from Gianni Versace.

More recently, the eltonjohnaidsfoundation announced that Chairman David Furnish and CEO Anne Aslett have made the Outstanding LGBT + Role Model list. The compilation is published annually by INvolve, a global network and consultancy which champions diversity and inclusion.

• James Guercio, who once owned Colorado’s Caribou Ranch Recording Studio, which attracted clients like Elton and Chicago, is also being recognised–for his work as a producer. The Musicians Hall of Fame Awards, to include a concert, are being held on the 22nd of November. Tickets are now on sale. The Musicians Hall of Fame was launched by Joe Chambers, who died a couple of months ago. One of the exhibit’s highlights is a William Knabe & Co. piano used by Elton and John Lennon when they arranged and rehearsed Lucy in the Sky with Diamonds. Elton also composed and recorded Philadelphia Freedom and Don’t Let the Sun Go Down on Me on this instrument.

You may be aware that the Goodbye Yellow Brick Road double album was on the Billboard 200 longer than Elton’s other recordings: a total of 111 weeks. MT finds the opener, Funeral For a Friend/Love Lies Bleeding, as emotive as when the disc was first released. That’s also the case with non-hits, such as Whispers (from Sleeping with the Past) and Shooting Star (A Single Man), isn’t it?

• Incidentally, did you ever catch Bryan Forbes‘ documentary about the making of Goodbye Yellow Brick Road? MT saw it on TV, and particularly enjoyed seeing Elton’s home and cameos from the likes of Gus Dudgeon, Dee Murray, and John Reid. It’s available to watch online, and is titled Elton John and Bernie Taupin Say Goodbye Norma Jean and Other Things.

If you’re looking for keepsakes, an Entertainment & Memorabilia Premier Auction is being held on 11 November. Among Ewbank‘s options-for-bidders is a signed Are You Ready For Love picture disc.

And here’s news about another disc . . . Peachtree Road. It was released this week (9 November) in 2004, and wound up at #17 in America, where it was gold by the end of that year. Answer-in-the-Sky was one of the stronger tracks, and hit #7 in the Adult Contemporary chart.

Those of you who have seen the Farewell Yellow Brick Road concert surely have vivid memories of how Elton closed out the evening. He took off his robe–the last wardrobe change of the night–to reveal a tracksuit underneath; then rode a lift to what the Oklahoman has described as ”a secret compartment in the big screen, disappearing into the night.” MT found the feat, which involves a TAIT Navigator entertainment automation platform and winch, to be haunting, yet a bit sad, at the same time. TAIT is an EJ concert stalwart, and also created an artistic portal for the farewell tour.]As for the concert itself, most of the songs were old but sounded fresh. Even so, deep cuts would have been appreciated. Then again, you can’t please all of the people all of the time.