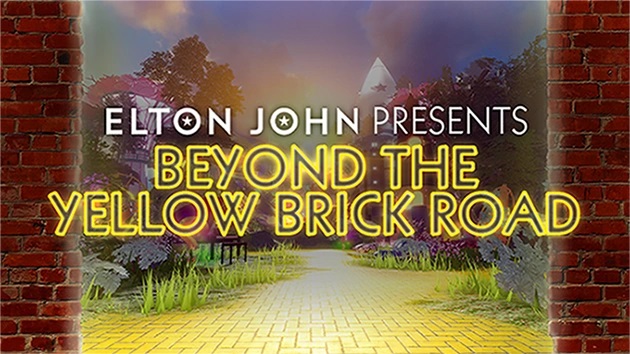 I Am Your Roblox.

Elton has entered the Roblox universe.

Once inside Elton-John-Presents-Beyond-The-Yellow-Brick-Road, gamers can enjoy a virtual experience of the singer’s music, fashion and photos . . . and even partake in scavenger hunts, and trivia quizzes. [It’s hard to believe, but Elton once considered himself a Luddite.]

Beyond the Yellow Brick Road will also host a special virtual performance. Premiering 17 November and running through 20 November, the 10-minute gig will consist of EJ favourites.

Elton says he is thrilled to be embarking on this new venture. It means a lot to him since he has seen how much joy Roblox has brought his two sons.

Meanwhile, Elton has been continuing his tour, stopping at the Ball Arena in Denver, Colorado, on Friday night. That’s where he changed his specs three times–according to the Gazette–from pink to blue to green, and sent the 20,000 attendees a ”melodic lyrical love letter.”

In a recent interview, Elton said he has two tunes with Ed Sheeran that have yet to be released. These are Christmas songs, and he doesn’t know when they will be available. Last year, their other holiday song, Merry Christmas, became the UK’s #1 single.

On Saturday night, Eminem was inducted into the Rock and Roll Hall of Fame, and was joined by Ed for his hit, Stan. That’s the same number Elton sang with the rapper at the Grammy Awards in 2001. A quick clip of this, as well as a snippet of Elton talking about Eminem, was featured during a video montage (almost two and a half minutes into the footage).

Also on Saturday evening, some lucky folks got to enjoy an Elton John Live Performance at The LACMA (the Los Angeles County Museum of Art). Our man appeared with a red piano, and a set list which included Don’t Let the Sun go Down on Me.

As for more current music, another Hold Me Closer remix is out now–from Pink Panda. You will remember that Joel Corry and Purple Disco Machine also worked on the Elton/Britney Spears hit.

MT is surprised that another recent collaboration, Cold Heart (Pnau Remix) with Dua Lipa, did not make a list of the UK’s most streamed songs. This compilation of releases (since 1952) comes from the Official Charts Company, BBC Radio 1 and BBC Radio 2.

It is a way to celebrate the 70th anniversary of the Official UK Singles Chart, which started in 1952. Two EJ classics, Your Song and Tiny Dancer are included. So they will make it into a special BBC Radio 2 broadcast of the songs from 1969-1999 on 12 November and 13 November.

Elton’s knowledge of music has been called encyclopedic. However, he wasn’t familiar with one Rocket Hour guest. When he familiarised himself with Ronnie-Foster’s material, Elton quickly became a fan and the two recently met up in Las Vegas.

• Elton is also known for his generosity. One of his gifts–for John Lennon–was a gold and platinum pendant. The gold portion was shaped like a wall and the platinum suggested a  bridge–an ode to John’s Walls And Bridges album, May Pang wrote in her 1983 book, Loving John (and recollected by the Showbiz Cheat Sheet website). Elton and John’s Whatever Gets You Through The Night is part of the LP. In fact, a copy with Lennon’s signature is currently on the auction block. You might also be interested to learn that Jimmy Iovine, who was a young engineer during the recording, was ”terrified” at the prospect of working with the two superstars.

Another notable album was released this month in 1985. Ice on Fire, which came out on the fourth of November, included Nikita, which hit #3 in the UK. And the music video remains one of MT‘s favourites. Who can forget the scenes of Elton handing over his passport for scrutiny, slow dancing, and cheering on a team (the Watford Hornets, perhaps?) in his giant boots?

• Wrap Her Up, with George Michael, was another catchy track, and unlike most, was written by members of the Elton John Band–in addition to Elton and Bernie Taupin. The video is also unusual: In the concert shoots, Elton moves around a great deal, as opposed to sitting at a piano, and there’s footage of actresses like Marilyn Monroe and Marlene Dietrich.

That’s a wrap for now, as they say in filming circles. But tune in next time for news about another Hall of Fame, Farewell Yellow Brick Road observations, and more. . . .