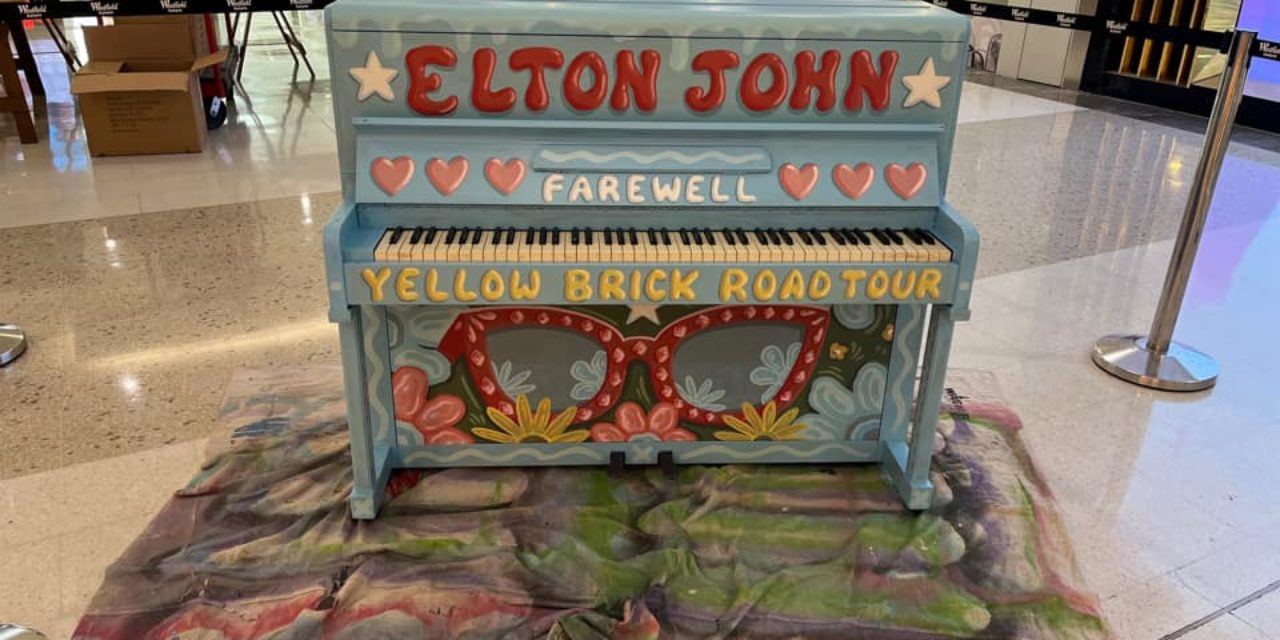 2022 was a splendid year for concerts. Pollstar says that was mainly because of touring artists like Bad Bunny and Sir Elton. The gross estimate? $6.28 billion!

Elton will soon be back on the road. As he observed in a video, his Australian tour kicks off in Newcastle.

”Then it’s pedal to the metal” until his Stockholm, Sweden, appearance on 8 July at the Tele2 Arena.

As for the Farewell Yellow Brick Road concerts at Newcastle’s McDonald Jones Stadium. . . . As many as 30,000 visitors are expected to pour into the city: 30,000, by the way, is the stadium’s capacity. Newcastle Transport hopes to ease congestion by offering free shuttle bus service. A representative told the Elton Blog that they will pick up customers from key locations across half a dozen routes. Prior to this, an Elton bus has been spotted–”a bus with an advertising wrap installed by the concert promoter travelling across our routes.”

Local artist mitchrevs is getting involved, too. He has painted a piano, inspired by Elton. The instrument, designed with hearts and musical notes, is on display at Westfield Shopping Center. Elton is also expected to figure in Mitch’s permanent mural for the stadium. No word on when that will be finished, though.

Ahead of the 8 and 10 January shows in Newcastle, Elton’s private-jet was spotted a couple of times–as he arrived at, then departed Hamilton Island. According to the Courier Mail, Elton and his family spent time at a luxury resort.

This brings to mind the Hilton Experience package in 2017. Besides a helicopter tour of the Barrier Reef, there was a chance to spend a couple of nights at the five-star Hilton Cairns and get tickets to see Elton at Cazaly’s Stadium.

When it comes to the Barrier Reef, Elton’s husband prefers a more intimate experience. A couple of years ago, David Furnish posted a photo of himself with their children in diving gear. He wrote that no trip to Australia is complete ”without taking in the beauty of the Barrier Reef.”

Speaking of travel, did you ever catch Elton’s interview with the harlemgospeltravelers on his Rocket Hour show in 2020? They were accompanied by their mentor and producer, Eli Paperboy Reed. Elton was already familiar with him. Reed’s earlier single with Big Daddy Kane, Ninety Nine Cent Dreams, made its premiere on Rocket Hour. Elton had also endorsed reed’s song, Hold Out. In September, the Harlem Gospel Travelers released their second album, and one of the tracks is called Hold Your Head Up. That’s an original, not a cover of Argent‘s old hit.

Over in the UK, the nominees for February’s WhatsOnStage-Awards have been announced. Tammy Faye, which ran at the Almeida Theatre in London, is up for several honours, Best New Musical among them. So is another EJ musical: Billy Elliot, which played the Curve in Leicester, England. Its nominations include Best Regional Production. Both also made a wish list of productions WhatsOnStage hopes will soon return. In October, the Curve‘s Billy Elliot got the UK Theatre Award for Best Musical Production.

Heading over to India . . . their eighth Hard Rock Cafe has opened. The New Delhi branch boasts a pair of platform shoes worn by Elton during his live Daniel music video in 1972. Actually, his big, furry red coat was a lot more noticeable!

On a more sombre note, we want to remember a celebrity photographer, TV news veteran, and soccer star.

Frazer Ashford was 71, and his subjects ranged from elton-john to Glenda Jackson. His archive, with well over 200,000 images, includes landscapes which Frazer shot during his many trips.

Barbara Walters was saluted by eltonjohn/feed, who called her ”an ally and trailblazer for women in media.” The 93-year-old was the first woman to co-anchor an evening newscast. She interviewed musicians (including Elton) as well as politicians, and appeared on ABC‘s The-View, which she also created.

Pele was 82. The only soccer player to win three World Cup titles, he was praised by Elton for being ”majestic and elegant” and ”the greatest ever.”