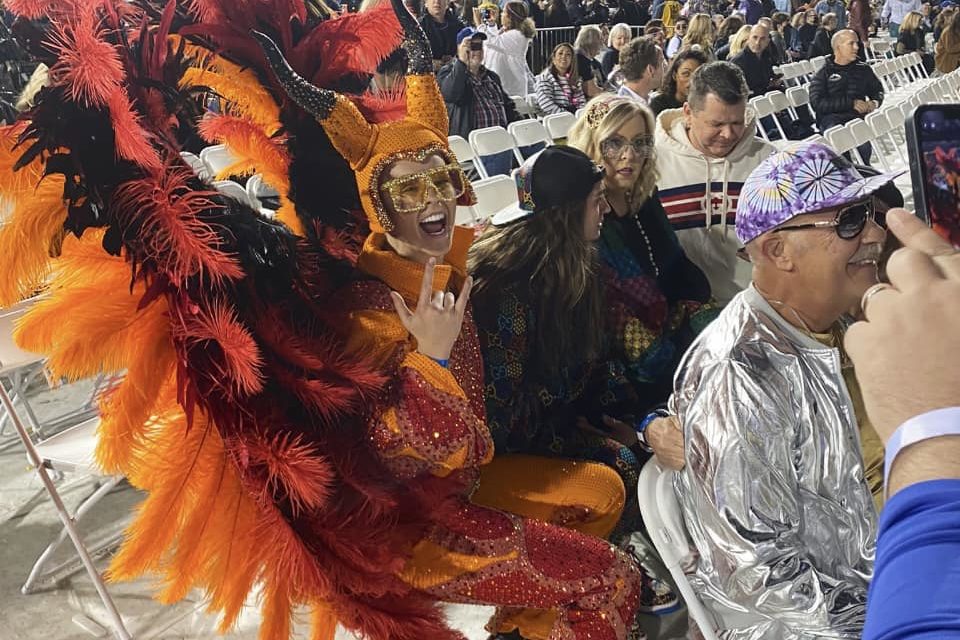 Songs From The West And East Coast

The holiday season is nearly here, so who better to usher it in than Sir Elton? That’s what happened on Tuesday evening outside Saks Fifth Avenue in New York.

Elton was joined by his family and Saks CEO Marc Metrick, who announced a one million dollar donation to the EJAF. The entertainer played Your Song and there was a medley of his hits during the Saks Fifth Avenue lights show and window extravaganza. The grand entrance was memorable as well: Elton arrived in what looked to be a purple version of the golf cart he rode to his Hollywood Walk of Fame ceremony in 1975!

Elton and Dua Lipa had a good reason to celebrate after the latest American Music Awards. They nabbed theBest Collaboration trophy for Cold Heart (Pnau Remix).

CONGRATS to @eltonofficial & @DUALIPA for taking home the #AMAs Collaboration of the Year for “Cold Heart – PNAU Remix)! 🏆🏆 pic.twitter.com/7mOmwIQQ50

Elton tweeted a thank you and the two sang their hit on Sunday night at Elton’s final Dodger Stadium show. It was a striking contrast: Elton in his glittery robe and Dua in formal evening wear. Kiki Dee and Brandi Carlile also joined Elton at the Los Angeles, California, venue, for, respectively, Don’t Go Breaking My Heart and Don’t Let the Sun go Down on Me.

Among the A-listers in the audience were Mick Jagger, Paul McCartney, Joni Mitchell, Donatella Versace, Jude Law, and Taron Egerton, according to the Hollywood Reporter. Taron must have done a double take when Jojo Siwa showed up in an orange get-up with devil horns . . . one of his looks in the Rocketman biopic.

As for Elton’s more recent L.A. appearance, the Duke and Duchess of Sussex sent Elton warm wishes ahead of the gig. They also thanked him for being a friend to their family, including Prince Harry‘s mum, the late Princess Diana.

Meanwhile, reporter JB Flint has revealed that Disney CEO Bob Chapek was originally supposed to introduce Elton at Dodger Stadium. That did not happen because he was replaced by Bob Iger. The latter had retired from Disney just last year, having served as chief executive for a decade and a half.

Elton’s concert can still be viewed on demand at Disney Plus. Viewers of the live broadcast were startled when Donald Trump‘s name cropped up in the closed captions. It was a technical error which was quickly corrected.

Looking ahead, David Furnish explored the possibility of a residency with billboard magazine. He pretty much ruled out Las Vegas, Nevada, as Elton’s already had two successful residencies there. But it’s likely Elton will find another adequate setting since performing is in his blood.

Back to Elton and Dua . . . Variety has announced the singers have been named Hitmakers of the Year. Besides a celebration in the magazine’s 30 November issue, an invitation-only brunch will be held on the third of December. Hitmakers, now in its sixth year, salutes the writers, publishers, producers, managers and executives responsible for making (and breaking) the 25 top songs as measured by Luminate.

Elton and Britney Spears have proved to be a winning combo, too. They are cited in the MediabaseCharts for their #1 Hot Adult Contemporary hit.

• Incidentally, Dexters is offering a hot property. Metro says the Shepherd’s Bush townhouse used to be Virgin recording studios. Phil Collins, Coldplay, The Jam, Robbie Williams, and Queen were a few of the illustrious clients. So was Elton, who recorded Candle in the Wind 1997 here.